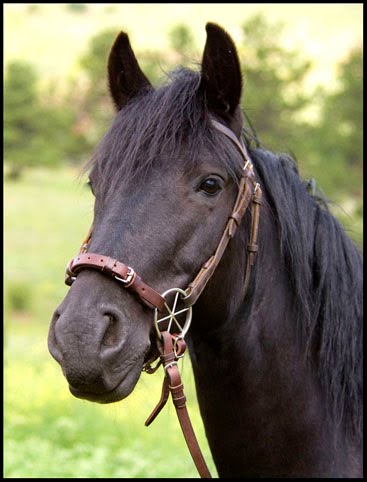 It is about a year, that 5 of us came together to join forces in our quest to save the American Mustang. All of us had been involved with one aspect or another pertaining to the management of Americas Wild Horses, now felt, that a critical momentum had been reached. Information and data needed to be gathered, exchanged, and evaluated and a group effort made to both increase exposure and give comfort and support.
As a group and as individuals we engaged in a letter writing campaign, travelled to a summit in Washington with associated protest, attended several round-ups, visited and monitor HMA's (Horse Management Areas)- Sandwash Basin, Little Bookcliffs and Pryor Mountains. We followed a quest for help of the Blackjack Mountain Horses in the Kiamichi Mountains SE Oklahoma, followed the bloody trail of the 3Strikes Ranch Mustang Killing in Nebraska, ...then continued to New Mexico to touch base with 3 Wild Horse areas along the border.....
Visits to Canon City Correctional Facility were on the regular agenda to see incoming horses.
The MustangHeritageFoundation Extreme Mustang Makeover was part of our effort, several visits to our local representatives and the Geological Survey lead to more information about census and birth control. There were several locally organized grass roots protests and continuous attempts to educate the public and gather information and facts.
On a happier note, we continued to sponsor and follow our Adventure Riders on the Contintal Divide with 4 mustangs straight into Canada over the last 4 years, www.abenteuerreiter.de and also Ramsey Rue's Sparrowhorse mustangride from Colorado to Idaho.
Our OWN Mustangs rode in parades, attended protests, continued their duty for the Forest Service, performed in the Makeover, competed in endurance and for the sake of our sanity took us into the Wild Horse Areas for recreation and volunteer work.
Nonetheless thousands and thousands of horses were aggressively rounded up, too many of them suffering and dying in the processing. Over 40 000 are scheduled to be impounded in feedlots. An estimated 15 000 to remain on the range with heavily skewed sex ratios to favor males over females, that are routinely sterilized.
New attempts have reached some fruition to establish Sanctuaries and Preserves, leading to much discussion about the pros and cons of those utopias.
It feels as if time stands still. The question always: How many are out there, what will it take to keep them running free and manage them in the wild rather than in captivity and deprivation.
The 1971 Wild Horse Act was never ment for that.
Today we greet Ginger Kathrens in her Talk about THE TRUE NATURE OF WILD HORSES"
and hope that you take time to consider and join our group effort.
Thank you
Gabriele
Posted by Gabriele and Lourie at 4:31 PM 1 comment:

From Metal to Sculpture by Dwayne Cranford....

The two mustangs are rearing in joyous play on the way to Redfeather Lakes. They are Rusty and Chisel (because Dwayne lost a chisel in the leg of the little mare on the left) and they are over-life size metal sculptures by local resident artist Dwayne Cranford. They will also be on display at the presentation of Ginger Kathrens at the University of Colorado on Nov. 10th.
For more info about the artist visit: www.metal2sculpture.com 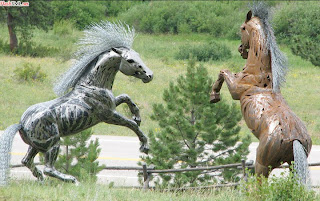 The True Nature of WIld Horses at CSU, Ft. Collins 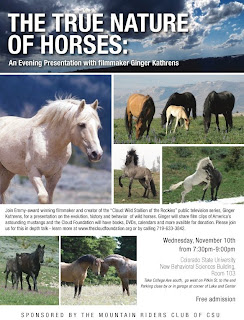 Posted by Gabriele and Lourie at 8:03 AM No comments:

we will collect interested LG buyers and when we have 10, we will make an order to Germany for the appropriate colors. This way we save shipping cost and don't have unwanted inventory lying in our shelves. The cost of an LG will be $125.- inclusive shipping in the US. Please send an email with questions. 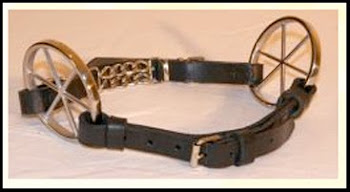 OUR BASE AND GOAL

Gabriele and Lourie
I would like this blog to be a forum for discussion about bitless riding and a source of information for riders who are interested in exploring their options both recreational and competitive. The LG-Zaum is one of the products currently on the market. On the tracks of Wild Horses my equine Photographer Friend Lourie Zipf and I have come across many different ways of riding. The adage repeats itself: LESS IS MORE... My showcase are the Mustangs, their promotion and preservation. Part of that effort is to show their training sensibility and talent both in hand and under saddle. A bridle that will allow for both close contact and less influx will serve the horse and rider the best.